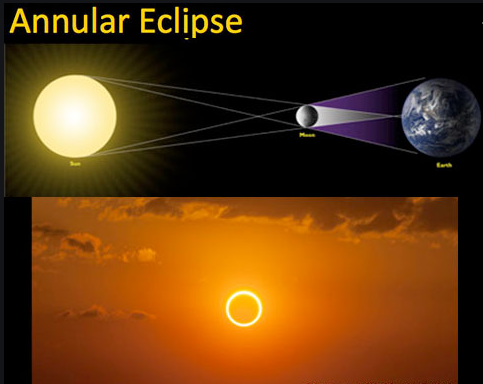 What is an Eclipse?

The Moon covers the centre of the Sun, giving the appearance of a bright ring.
The key difference between Annular and Total is that the Moon is further away from the Earth during an Annular as compared to a Total Eclipse.
There are no annular lunar eclipses because Earth is much bigger than the Moon, and its shadow will never be small enough to leave a ring.

During a solar eclipse, the Moon casts two shadows on the Earth:

NASA maintains that the Sun can be viewed safely using the naked eye only during a total eclipse, while during partial and annular solar eclipses, the Sun should not be viewed without proper equipment and techniques.
Not using proper methods and equipment for viewing can cause permanent eye damage or severe visual loss, it says.
Safety equipment includes eclipse glasses and using appropriate solar filters for covering binoculars, telescopes and cameras.

Different stages of the annular solar eclipse as seen from Dindigul in Tamil Nadu.