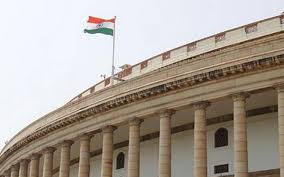 The Parliament building in New Delhi. The Indian Constitution provides for parity of powers between the Lok Sabha and the Rajya Sabha in law, making an exception in some cases. The Money Bill or Finance Bills can be introduced only in the Lok Sabha which only can approve the Demands for Grants. On the other hand, the Rajya Sabha has some special powers as requiring to adopt a resolution allowing Parliament to legislate on subjects in the State List and creating All India Services, besides approving proclamations of Emergency and President’s Rule when the Lok Sabha is dissolved.

An analysis undertaken by the Rajya Sabha Secretariat recently revealed that during the past 68 years since the first general elections in 1952, the government of the day had a majority in the Rajya Sabha only for 29 years and was in a minority for 39 years, including an unbroken stretch for the past 31 years. Since 1952, the Rajya Sabha held 5,472 sittings and passed as many as 3,857 Bills till the Budget Session this year.

An analysis by the Secretariat revealed that the productivity of the Rajya Sabha till 1997 has been 100% and above and the past 23 years have thrown up a disturbing trend of rising disruptions. While the time spent by the Rajya Sabha on legislation since 1978 remained the same at about 29%, a concern emerges in respect of the ‘Oversight’ function of the House.

This decline is primarily on account of disruptions forcing cancellation of Question Hour frequently. Disruptions also dent the quality of law-making as seen in passing of Bills without discussion sometimes.

However, the Rajya Sabha is proving to be more and more a ‘deliberative’ body with increasingly more time being spent on this function. After the initial frictions, Rajya Sabha and Lok Sabha have proved to be constructive partners in steering the socio-economic transformation of the country since 1952, co-scripting pioneering laws.

By virtue of this, Rajya Sabha can’t be said to be ‘obstructive’. What needs to be addressed by all the stakeholders is that while enabling Rajya Sabha to retain its independence, it should not be seen as ‘disruptive’ as evidenced over the past two decades.

Political passions should not be the basis of such disruptions, if the perception is that they are. Both the sides of the House have a stake in proper functioning of Rajya Sabha.