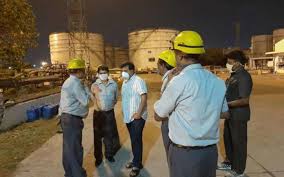 The gas will be transported in two consignments:

Jolted by the death of 12 persons and hundreds falling sick due to gas leak at LG Polymers factory in Visakhapatnam, the State government has begun the process of transporting 13,000 tonnes of styrene gas in two consignments of 8,000 tonnes and 5,000 tonnes to South Korea.

Jagan Mohan Reddy on Monday asked the officials of industries and factories departments to conduct a safety audit of the industries, particularly those involved in the manufacturing and processing of harmful chemicals, to ensure that incidents like the one at LG Polymers did not repeat.

Jagan Mohan Reddy emphasised on the need for relocation of hazardous industries and strict compliance with safety protocols stipulated by the Central government. Visakhapatnam Collector V. “Around 13,000 tonnes of gas stored in tanks are intact and it is being loaded into two vessels.

Sanitisation of the villages in the vicinity of the factory has almost been completed, they said. Jagan Mohan Reddy instructed the officials to pay Rs.10,000 to each resident of the five affected villages irrespective of their age and that the amount be credited to the unencumbered bank accounts of the women in those families.